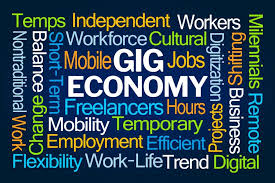 Tunde Wale-Temowo heads the Human Resources function of a specialized…

Differentiating Your Products or Services as an SME

The “Gig Economy”, which is also referred to as the “sharing or platform economy” is an increasingly popular work arrangement in which workers are engaged as independent contractors as against the traditional full-time employments. “Gigs” as formal employment options are still relatively new in Nigeria. In colloquial parlance, they are seen as “side hustles” or “runs”, suggesting an alternative, informal endeavour individuals engage in to supplement the income from their main jobs.

The Information and Communications Technology (ICT) sector seems to be the early mover in the emergence of gigs in the country. It is not unusual to see ICT professionals working independently for multiple companies at the same time. The relationship therefore moves from employer – employee, to contractor/ consultant – client. Ride-hailing companies have also provided an avenue for more Nigerians to be a part of the gig economy. Some fleet owners actually double as drivers in their spare time.

A study done by McKinsey in 2016 showed that between 20% and 30% of the working-age population in the United States and the European Union were engaged in one form of independent work or the other. “Free agents”, who deliberately engage in independent work and earn their primary income from it were said to have constituted 30% of the survey population. 40% of the surveyed population were classified as “casual earners”, who engage in independent work as a supplement to their primary source of income. It is not unlikely that this is the category where most gig workers in Nigeria currently fall into.