The Future of Food in Nigeria 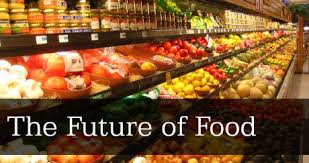 I learnt some time ago that most ideas are not really, like really, original. As a writer, that's very important so you are not accused of plagiarism and all 'what-not'. So, any time I'm brimming with topics to write about, I head for (you guessed right) the internet! This topic passed through the same test and here's what I found;

"The Future of Food is a 2004 American documentary film written and directed by Deborah Koons Garcia to describe an investigation into unlabeled, patented, genetically engineered foods sold in grocery stores in the United States for the past decade. In addition to the US, there is a focus on Canada and Mexico" (Wikipedia).

According to Food Fortification Initiative (FFI), a global organization in partnership with countries to promote, plan, implement, and monitor high-quality fortification practices, "Fortification is adding vitamins and minerals to foods to prevent nutritional deficiencies. The nutrients regularly used in grain fortification prevent diseases, strengthen immune systems, and improve productivity and cognitive development". Fortified foods, therefore, help to fill in the nutritional gaps in a diet.

The family size is reducing gradually. Time was when a nuclear family would have up to six children but not anymore. Therefore, the large products packaging referred to as "Family size" will be 'sent off' in the decades to come. Along with small families are a growing number of young people who are living alone and in small apartments. They do not have large storage spaces for large food packs. Already, food products are variously being reduced in pack sizes, whether dairy or cereal, beverages, snacks, etc, to suit current needs. As an entrepreneur, look around you and identify areas you can add value to this trend.

Young people are the target market for online shopping. A few years ago, I participated in a study on people's preferences for shopping locations. Many young people, up to 86% said they would prefer not to shop for food in the community markets due to the noise, filth, lack of/filthy toilets, pervasive incidents of thievery, rude shop attendants, and generally, poor customer service. More than 60% said they would gladly buy foods including meat, vegetables, fruits, fish, condiments, etc, from department stores, no matter the cost. That was an eye-opener. So, I can assure you that shoppers will be ordering periwinkle, snail, banga, fufu, kpomo, waterleaf, bitterleaf, etc, online in the coming decades. Come to think of it, what will happen to our community markets?

Fast foods and 2-minute noodles, among others, have changed the landscape of foods consumption. No more the drudgery of food preparation, especially, some of our local staples (ekpang nkukwo, ikokore, etc) which can take ages to prepare. For the growing population of the working class, no matter the pleasure, when you are tired out after a day's work, you need something simple, and easy to prepare, to eat. In the coming decades, there will be innovations in our staples to bring convenience to food preparation. Already, I've seen ground pepper, crayfish, egusi and beans (picked and cleaned), including processed and canned banga, yes banga, on shelves in supermarkets.

Nutritionists and dieticians have consistently, harped on healthy eating habits. We have been advised on foods to consume (fruits, vegetables, water, fresh foods, fish and chicken, etc) and those to reject (red meat, animal dairy, alcoholic beverages, carbonated drinks, processed foods, etc). Considering the growing number of health-conscious people in Nigeria, a lot more attention will be paid to healthy foods in the coming decades. The 'war' between the promoters of organic food and the supporters of GMO foods will escalate in the coming decades. You can bet that the politics of food safety and food production will be on full display. As an entrepreneur, you will need to watch from the sidelines and prepare to 'strike while the iron is hot'.

In the coming decades, there will be introduction of more sustainable models of food production in Nigeria. The advocacy activities for urban farming is gaining quite some attention with real estate developers, architects, town planners, land administrators, etc. This initiative aims to get food production hubs closer to residents in urban areas unlike the current location of farms strictly in rural areas. There will be food production systems that will empower consumers to determine what they eat - either from what they grow or from what they can buy around their neighbourhood.

There will be food production systems that will promote conservation of resources (time, water, energy, materials, etc). Apart from engaging the populace, it will help in encouraging the conscious and proper utilization of nature's resources for mankind.

Jeff Desjardins, in his article, "The Next Generation Food Systems", lists out four technologies that may have a profound effect on how we eat in the future (www.visualcapitalist.com):