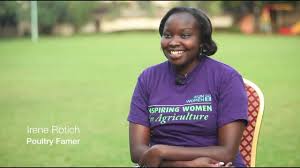 According to the Food and Agriculture Organization of the United Nations (FAO), "Women play a significant role in agriculture, the world over. About 70% of the agricultural workers, 80% of food producers, and 10% of those who process basic foodstuffs are women and they also undertake 60 to 90% of the rural marketing; thus making up more than two-third of the workforce in agricultural production (FAO, 1985).

Women are known and acknowledged, all over the world, to make essential contributions to the agricultural and rural economies, especially in developing countries. In the Agriculture sector, women are involved in producing crops, tending animals, processing and preparing food, working for wages in agribusiness enterprises, and engaging in trade and marketing. These, in addition to caring for family members and maintaining their homes. According to the FAO Report for March 2011, "many of these activities are not defined as "economically active employment" in national accounts but they are essential to the well-being of rural households".

In spite of the fact that the role and participation of women in agriculture is well recognized and clearly significant, there hasn't been much documentation about the engagement and investment of women in many critical activities in the agribusiness value chain beyond production and processing. Nor do we easily come across accurate, current, specific information and analysis of women ownership of large commercial agro-enterprises. Much as these women strive to be better productive and more relevant in the agribusiness sector, they often experience a multitude of problems.

It is believed that women's contribution to agribusiness will experience a huge boost were they to have sufficient funding for their business.

According to FAO, "the rapid modernization of agriculture and the introduction of new technologies, such as those that characterized the green revolution, have benefited the wealthy more than the poor, and men more than women".

These new techniques in agriculture, particularly those involving commercialization, have been discovered to "shift economic control, employment and profit from women to men" (ILO), causing increased suffering for families. This is because studies have found that, in general, income controlled by women benefits families more than income controlled by men (UN).